Life Inside The Senior Home: An Experience To Remember 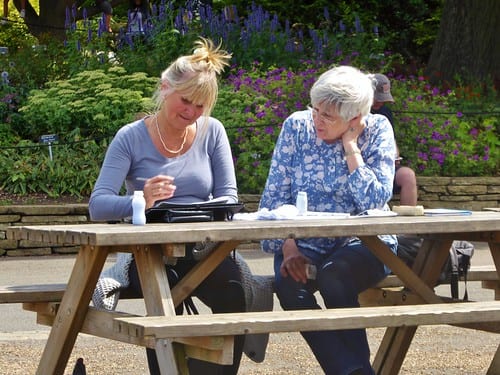 It was the month of September 2017 when the partner of my colleague inside a university organization, which was a registered nurse, decided to celebrate his birthday in a senior home. Hearing the news, I was both surprised and nervous about the thought of going since it will be my first time to visit a senior home because I never got the chance to meet any of my grandparents. Due to the excitement about the unknown, and the interest about the life inside a senior home (of course, besides the expected fun of hanging out with my close friends), I agreed to join the so called birthday celebration turned to an outreach program.

We met at 10 o’clock in the morning and the two cars we used, one owned by the birthday celebrant and one from his co-nurse, were fully packed with spaghetti in paper boxes and “bilao” or large woven tray filled with steamed rice cakes or “puto” in Filipino term. Moreover, wrapped gifts were also prepared as souvenirs to the beloved elderly we are soon going to meet.

We hit the road right away and the whole team was wearing white, which was, based on the traditional birthday celebrant, a representation of purity which is one of the purpose of the event that we are conducting. There were discussions and chats but it is obvious in the atmosphere inside the air freshener scented car that all of us are thrilled to finally get to the senior home in the city. After thirty minutes, we finally reached the senior home and that is where the series of experience and realizations happened.

The First Glimpse On Their World

We walked pass the high steel gates and into the entrance that led to a plain corridor with multiple doors I assumed were for bedrooms on both sides of the wall. I started to feel ashamed of myself for stereotypically thinking that housings for senior citizens would smell like urine and would look like chaos. In contrary, the senior home felt safe, comfortable, and clean. The hallways were fully swept and you would not see any object that would make the place look dirty. We met the manager of the senior home that I believed was also the person they have coordinated with before and she led us to a wider place backyards where the seniors are well-groomed. Some were waiting on wheelchairs, while others were on regular chairs. Definitely they look different from one another with obvious wrinkles on their faces and grayish strands of hair but one thing look definitely universal to all of them, and it was the look of surprised happiness that each of their faces depicted.

The Blessings Behind Sorrows

The day began and we started off by feeding the seniors. Most of need to assist full time and spoon feed them (but using fork for the spaghetti, of course) and it was a delight to see them even when these forms of happiness sometimes got reflected to toothless peals of laughter or even smiles through their eyes. As the day continued, we moved on to the second part of your event which was grooming the elderly. We witnessed the extreme excitement on their faces when we gave them mirrors and they got the chance to look at their own reflection. Some burst in peals of laughter and some seemed like very focused on their twin behind the glasses, but one senior caught my attention. She was intensively jubilant when one of our friends did a haircut for her. She was almost squealing like a child, and according to the staff, she was the happiest senior in the home. When I personally asked her once the activity was done, she proudly mentioned “I guess there is no reason to be sad when you are blessed with these people who take care of you, knowing someone will assist you and someone got your back no matter what.” I smiled by the thought, and even when I am fully aware that support is something that everyone of all ages need, I know for sure that my presence made something bright that day.

A Curve Of The Lips That Means a Lot

The day would not end without the expertise of the nurses being applied. The birthday celebrant, including his colleagues, did basic medical support like providing professional health care to certain sicknesses in the home such as skin rashes, oral problems specifically for the gums, and food supplements. After that, the gifts were soon given to them and my heart almost melted upon witnessing too much happiness in a small area and a short amount of time. Finally, as the day ended as we are about to leave the senior home, I took one last glimpse of the world they live in knowing that one day I would definitely return to it.

I saw them bid goodbye and I saw the smiles and even when I know that there are high chances that tomorrow they might not be able to remember us anymore, at least we got the chance to meet them and had a glimpse of what is life inside a senior home.