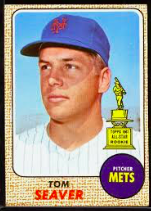 As published on March 7, 2019 by www.nbcnews.comand written by David K. Li

The Hall of Fame pitcher has “chosen to completely retire from public life,” his family said.

Tom Seaver led the New York Mets to two World Series and started Game 3 against the Oakland Athletics at Shea Stadium in New York on Oct. 16, 1973. Hall of Fame pitcher Tom Seaver is suffering from dementia and will not make any more public appearances, his family announced Thursday.

The 74-year-old right-hander, who led his “Miracle Mets” to one of the most improbable championships in American sports history in 1969, plans to keep working on his vineyard in California, his family said.

“The Seaver family announced today that Hall of Fame pitcher Tom Seaver has recently been diagnosed with dementia,” the National Baseball Hall of Fame in Cooperstown, New York, said in a statement Thursday.

“Tom will continue to work in his beloved vineyard at his California home, but has chosen to completely retire from public life. The family is deeply appreciative of those who have supported Tom throughout his career, on and off the field, and who do so now by honoring his request for privacy.” 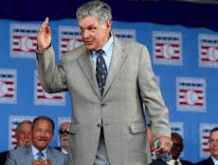 Fellow Hall of Fame pitcher and contemporary Jim Palmer said Seaver was his role model. “Tom Terrific for a reason,” he tweeted on Thursday. “I always strove to be like Tom both on and off the field.” Seaver was elected to the Hall of Fame in 1992 after a spectacular 20-year career. He won the National League’s Rookie of the Year award in 1967, was a 12-time All-Star and took home three Cy Young Awards, in 1969, 1973 and 1975. He won 311 games and lost just 205 with the Mets, Cincinnati Reds, Chicago White Sox and Boston Red Sox.

The Mets’ years of losing took a decided turn for the better in 1966 when the Queens-based club signed Seaver out of the University of Southern California. His most memorable season came in 1969 when he led the Mets to the World Series title, after the expansion franchise suffered through seven consecutive losing seasons after it joined the major leagues in 1962.

Mike Piazza said Seaver will always be “the heart and soul of the Mets” and “the standard which all Mets aspire to.” In recent years, Seaver, a native Californian, has devoted his time to a vineyard that produces about 400 to 500 cases of cabernet sauvignon a year. “So sad to hear Tom Seaver has dementia,” Piazza said on Twitter, adding that he did not “feel worthy to be mentioned in the same breath,” and was honored to be with him in the Hall of Fame.